Near Luchem, Germany, he volunteered to attempt the destruction of a nest of 5 enemy machineguns located in a bunker 150 yards to the flank which had stopped the advance of his platoon. Stripping off his pack, overshoes, helmet, and overcoat, he sprinted alone with his rifle and hand grenades across the open terrain toward the enemy emplacement. Before he had gone half the distance he was hit by a burst of machinegun fire. Dropping his rifle, he continued to stagger forward until he fell mortally wounded only 10 yards from the enemy emplacement. His single-handed attack forced the enemy to leave the machineguns. During this break in hostile fire the platoon moved forward and overran the position. Pvt. Henry, by his gallantry and intrepidity and utter disregard for his own life, enabled his company to reach its objective, capturing this key defense and 70 German prisoners. 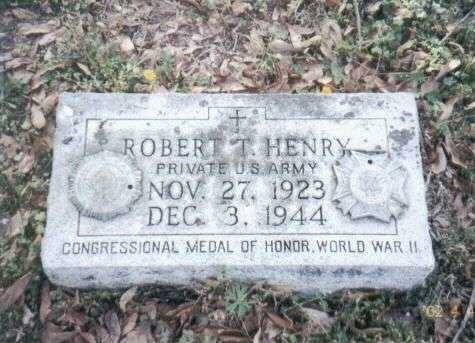