PLAQUE LOCATED ON BACK OF MEMORIAL


For conspicuous gallantry and intrepidity at the risk of his life above and beyond the call of duty. Pfc. Olive was a member of the 3d Platoon of Company B, as it moved through the jungle to find the Viet Cong operating in the area. Although the platoon was subjected to a heavy volume of enemy gunfire and pinned down temporarily, it retaliated by assaulting the Viet Cong positions, causing the enemy to flee. As the platoon pursued the insurgents, Pfc. Olive and 4 other soldiers were moving through the jungle together when a grenade was thrown into their midst. Pfc. Olive saw the grenade, and then saved the lives of his fellow soldiers at the sacrifice of his own by grabbing the grenade in his hand and falling on it to absorb the blast with his body. Through his bravery, unhesitating actions, and complete disregard for his safety, he prevented additional loss of life or injury to the members of his platoon. Pfc. Olive's extraordinary heroism, at the cost of his life above and beyond the call of duty, are in the highest traditions of the U.S. Army and reflect great credit upon himself and the Armed Forces of his country. 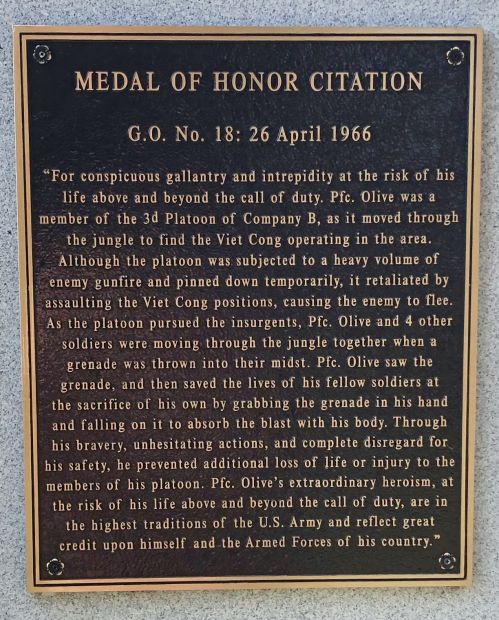