CAPTAIN STEVEN L. BENNETT, UNITED STATES AIR FORCE, 20th Tactical Air Support Squadron, Pacific Air Forces.
Place and date of action: Quang Tri, Republic of Vietnam, June 29, 1972.
Citation:
Capt. Bennett was the pilot of a light aircraft flying an artillery adjustment mission along a heavily defended segment of route structure. A large concentration of enemy troops was massing for an attack on a friendly unit. Capt. Bennett requested tactical air support but was advised that none was available. He also requested artillery support but this too was denied due to the close proximity of friendly troops to the target. Capt. Bennett was determined to aid the endangered unit and elected to strafe the hostile positions. After 4 such passes, the enemy force began to retreat. Capt. Bennett continued the attack, but, as he completed his fifth strafing pass, his aircraft was struck by a surface-to-air missile, which severely damaged the left engine and the left main landing gear. As fire spread in the left engine, Capt. Bennett realized that recovery at a friendly airfield was impossible. He instructed his observer to prepare for an ejection, but was informed by the observer that his parachute had been shredded by the force of the impacting missile. Although Capt. Bennett had a good parachute, he knew that if he ejected, the observer would have no chance of survival. With complete disregard for his own life, Capt. Bennett elected to ditch the aircraft into the Gulf of Tonkin, even though he realized that a pilot of this type aircraft had never survived a ditching. The ensuing impact upon the water caused the aircraft to cartwheel and severely damaged the front cockpit, making escape for Capt. Bennett impossible. The observer successfully made his way out of the aircraft and was rescued. Capt. Bennett's unparalleled concern for his companion, extraordinary heroism and intrepidity above and beyond the call of duty, at the cost of his life, were in keeping with the highest traditions of the military service and reflect great credit upon himself and the U.S. Air Force. 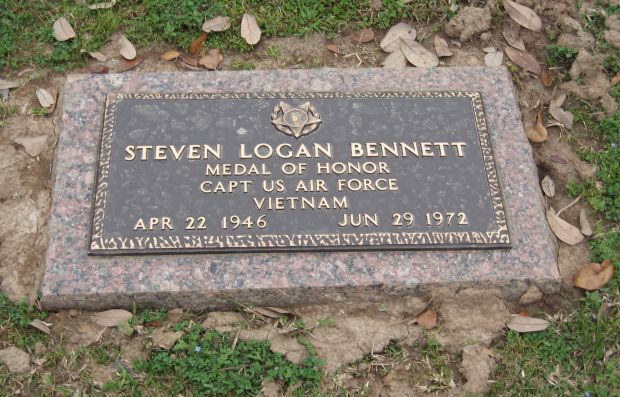