for service as set forth in the following CITATION:
For conspicuous gallantry and intrepidity at the risk of his life above and beyond the call of duty while serving with Marine Medium Helicopter Squadron 263, Marine Aircraft Group 16, First Marine Aircraft Wing, during operations against enemy forces in the Republic of Vietnam on January 31, 1970. Participating in a helicopter rescue mission to extract elements of a platoon which had inadvertently entered a minefield while attacking enemy positions, Private First Class Clausen skillfully guided the helicopter pilot to a landing in an area cleared by one of several mine explosions. With eleven Marines wounded, one dead, and the remaining eight Marines holding their positions for fear of detonating other mines, Private First Class Clausen quickly leaped from the helicopter and, in the face of enemy fire, moved across the extremely hazardous, mine-laden area to assist in carrying casualties to the waiting helicopter and in placing them aboard. Despite the ever-present threat of further mine explosions, he continued his valiant efforts, leaving the comparatively safe area of the helicopter on six separate occasions to carry out his rescue efforts. On one occasion while he was carrying one of the wounded, another mine detonated, killing a corpsman and wounding three other men. Only when he was certain that all Marines were safely aboard did he signal the pilot to lift the helicopter. By his courageous, determined and inspiring efforts in the face of the utmost danger, Private First Class Clausen upheld the highest traditions of the Marine Corps and of the United States Naval Service. 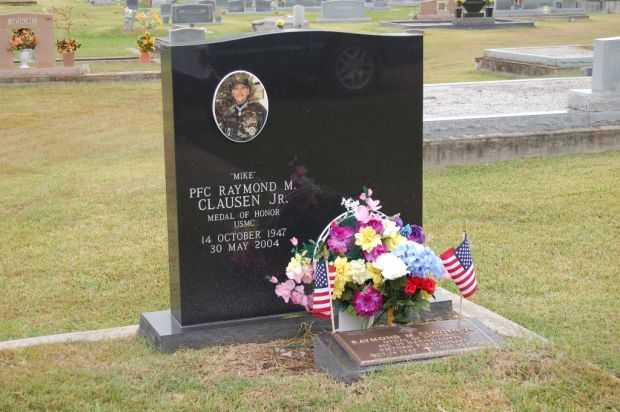