Rank and organization: Chief Warrant Officer, U.S. Army, 82d Medical Detachment, 45th Medical Company, 68th Medical Group.
Place and date: Kien Tuong Province, Republic of Vietnam, October 2, 1969. Entered service at: Kenner, La. Born: September 3, 1922, Etna, Pa.
Citation:
For conspicuous gallantry and intrepidity in action at the risk of his life above and beyond the call of duty. CWO Novosel, 82d Medical Detachment, distinguished himself while serving as commander of a medical evacuation helicopter. He unhesitatingly maneuvered his helicopter into a heavily fortified and defended enemy training area where a group of wounded Vietnamese soldiers were pinned down by a large enemy force. Flying without gunship or other cover and exposed to intense machinegun fire, CWO Novosel was able to locate and rescue a wounded soldier. Since all communications with the beleaguered troops had been lost, he repeatedly circled the battle area, flying at low level under continuous heavy fire, to attract the attention of the scattered friendly troops. This display of courage visibly raised their morale, as they recognized this as a signal to assemble for evacuation. On 6 occasions he and his crew were forced out of the battle area by the intense enemy fire, only to circle and return from another direction to land and extract additional troops. Near the end of the mission, a wounded soldier was spotted close to an enemy bunker. Fully realizing that he would attract a hail of enemy fire, CWO Novosel nevertheless attempted the extraction by hovering the helicopter backward. As the man was pulled on aboard, enemy automatic weapons opened fire at close range, damaged the aircraft and wounded CWO Novosel. He momentarily lost control of the aircraft, but quickly recovered and departed under the withering enemy fire. In all, 15 extremely hazardous extractions were performed in order to remove wounded personnel. As a direct result of his selfless conduct, the lives of 29 soldiers were saved. The extraordinary heroism displayed by CWO Novosel was an inspiration to his comrades in arms and reflect great credit on him, his unit, and the U.S. Army. 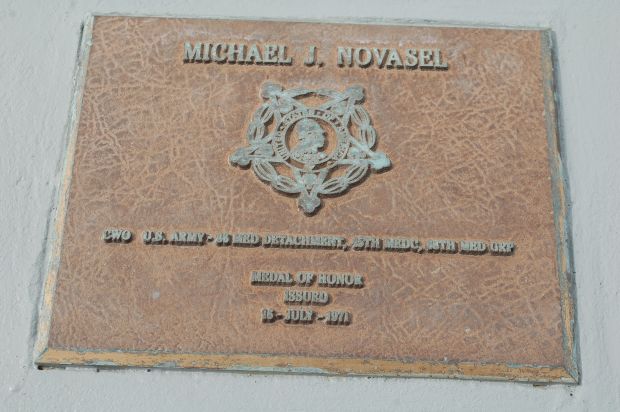