For conspicuous gallantry in action and intrepidity at the risk of his life above and beyond the call of duty on 1 August 1943. On this date he led the third element of heavy bombardment aircraft in a mass low-level bombing attack against the vitally important enemy target of the Ploesti oil refineries. En route to the target, which necessitated a round-trip flight of over 2,400 miles, Col. Kane's element became separated from the leading portion of the massed formation in avoiding dense and dangerous cumulous cloud conditions over mountainous terrain. Rather than turn back from such a vital mission he elected to proceed to his target. Upon arrival at the target area it was discovered that another group had apparently missed its target and had previously attacked and damaged the target assigned to Col. Kane's element. Despite the thoroughly warned defenses, the intensive antiaircraft fire, enemy fighter airplanes, extreme hazards on a low-level attack of exploding delayed action bombs from the previous element, of oil fires and explosions and dense smoke over the target area, Col. Kane elected to lead his formation into the attack. By his gallant courage, brilliant leadership, and superior flying skill, he and the formation under his command successfully attacked this vast refinery so essential to our enemies' war effort. Through his conspicuous gallantry in this most hazardous action against the enemy, and by his intrepidity at the risk of his life above and beyond the call of duty, Col. Kane personally contributed vitally to the success of this daring mission and thereby rendered most distinguished service in the furtherance of the defeat of our enemies. 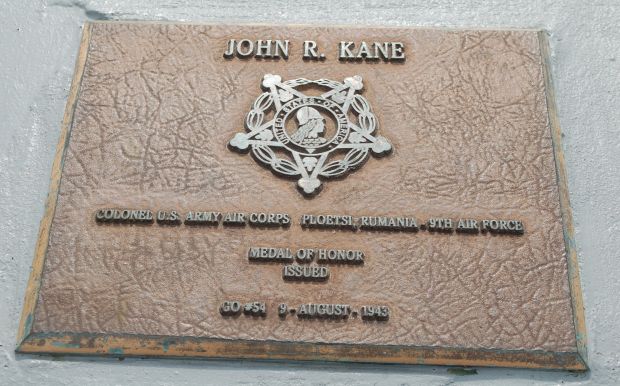