For conspicuous gallantry and intrepidity at the risk of life above and beyond the call of duty. On the night of 29 July 1944, near Grimesnil, France, during an enemy armored attack, Sgt. Whittington, a squad leader, assumed command of his platoon when the platoon leader and platoon sergeant became missing in action. He reorganized the defense and, under fire, courageously crawled between gun positions to check the actions of his men. When the advancing enemy attempted to penetrate a roadblock, Sgt. Whittington, completely disregarding intense enemy action, mounted a tank and by shouting through the turret, directed it into position to fire pointblank at the leading Mark V German tank. The destruction of this vehicle blocked all movement of the remaining enemy column consisting of over 100 vehicles of a Panzer unit. The blocked vehicles were then destroyed by handgrenades, bazooka, tank, and artillery fire and large numbers of enemy personnel were wiped out by a bold and resolute bayonet charge inspired by Sgt. Whittington. When the medical aid man had become a casualty, Sgt. Whittington personally administered first aid to his wounded men. The dynamic leadership, the inspiring example, and the dauntless courage of Sgt. Whittington, above and beyond the call of duty, are in keeping with the highest traditions of the military service. 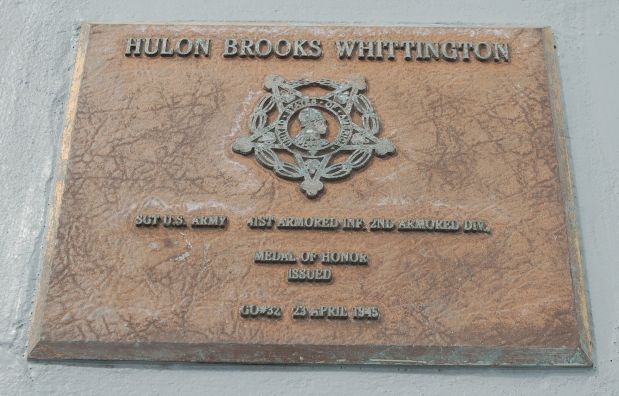