1st Lt. Schowalter, commanding, Company A, distinguished himself by conspicuous gallantry and indomitable courage above and beyond the call of duty in action against the enemy. Committed to attack and occupy a key-approach to the primary objective, the 1st Platoon of his company came under heavy vicious small-arms, grenade, and mortar fire within 50 yards of the enemy-held strongpoint, halting the advance and inflicting several casualties. The 2d Platoon moved up in support at this juncture, and although wounded, 1st Lt. Schowalter continued to spearhead the assault. Nearing the objective he was severely wounded by a grenade fragment but, refusing medical aid, he led his men into the trenches and began routing the enemy from the bunkers with grenades. Suddenly from a burst of fire from a hidden cove off the trench he was again wounded. Although suffering from his wounds, he refused to relinquish command and continued issuing orders and encouraging his men until the commanding ground was secured and then he was evacuated. 1st Lt. Schowalter's unflinching courage, extraordinary heroism, and inspirational leadership reflect the highest credit upon himself and are in keeping with the highest traditions of the military service. 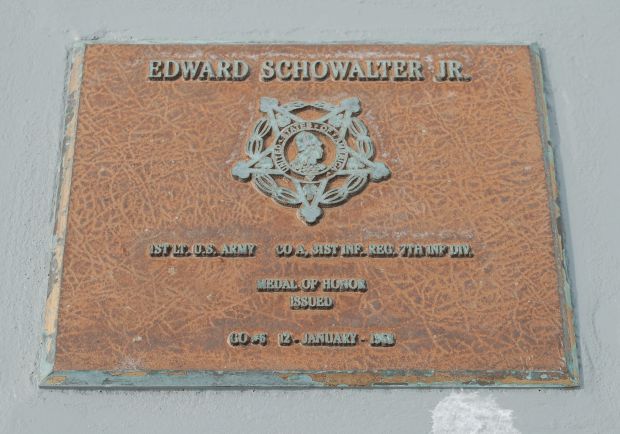