For conspicuous gallantry and intrepidity in action at the risk of his life above and beyond the call of duty. 1st Lt. Fournet, Infantry, distinguished himself in action while serving as rifle platoon leader of the 2d Platoon, Company B. While advancing uphill against fortified enemy positions in the A Shau Valley, the platoon encountered intense sniper fire, making movement very difficult. The right flank man suddenly discovered an enemy claymore mine covering the route of advance and shouted a warning to his comrades. Realizing that the enemy would also be alerted, 1st Lt. Fournet ordered his men to take cover and ran uphill toward the mine, drawing a sheath knife as he approached it. With complete disregard for his safety and realizing the imminent danger to members of his command, he used his body as a shield in front of the mine as he attempted to slash the control wires leading from the enemy positions to the mine. As he reached for the wire the mine was detonated, killing him instantly. Five men nearest the mine were slightly wounded, but 1st Lt. Fournet's heroic and unselfish act spared his men of serious injury or death. His gallantry and willing self-sacrifice are in keeping with the highest traditions of the military service and reflect great credit upon himself, his unit, and the U.S. Army. 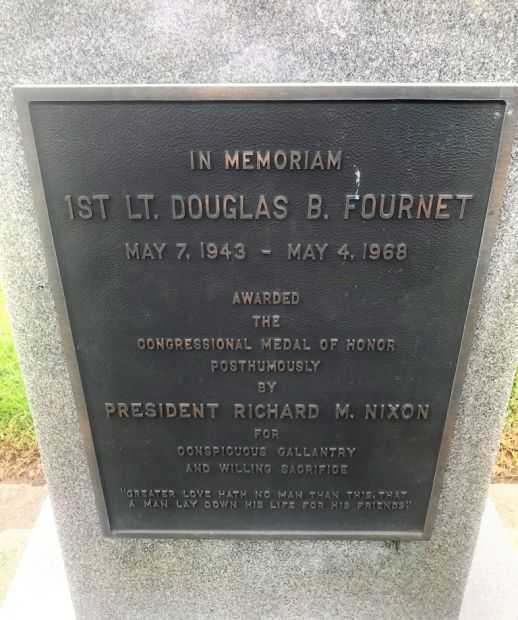