For conspicuous gallantry and intrepidity at the risk of his life above and beyond the call of duty as commanding officer of the U.S.S. Parche in a predawn attack on a Japanese convoy, 31 July 1944. Boldly penetrating the screen of a heavily escorted convoy, Comdr. Ramage launched a perilous surface attack by delivering a crippling stern shot into a freighter and quickly following up with a series of bow and stern torpedoes to sink the leading tanker and damage the second one. Exposed by the light of bursting flares and bravely defiant of terrific shellfire passing close overhead, he struck again, sinking a transport by two forward reloads. In the mounting fury of fire from the damaged and sinking tanker, he calmly ordered his men below, remaining on the bridge to fight it out with an enemy now disorganized and confused. Swift to act as a fast transport closed in to ram, Comdr. Ramage daringly swung the stern of the speeding Parche as she crossed the bow of the onrushing ship, clearing by less than 50 feet but placing his submarine in a deadly crossfire from escorts on all sides and with the transport dead ahead. Undaunted, he sent 3 smashing "down the throat" bow shots to stop the target, then scored a killing hit as a climax to 46 minutes of violent action with the Parche and her valiant fighting company retiring victorious and unscathed. 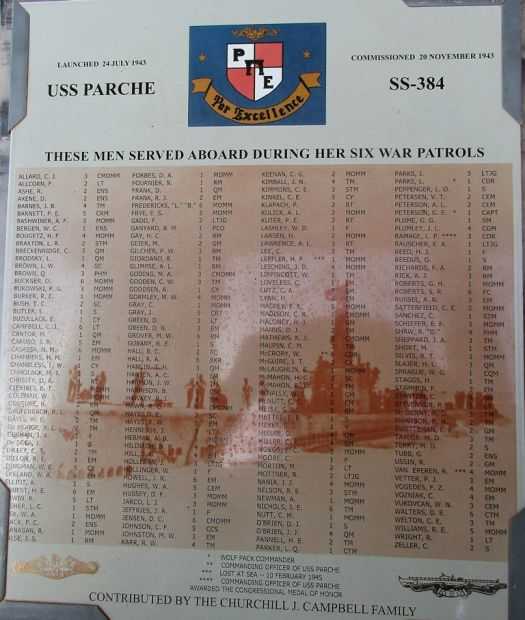