The President of the United States takes pride in presenting the MEDAL OF HONOR posthumously to
CORPORAL LEE H. PHILLIPS
UNITED STATES MARINE CORPS
for service as set forth in the following CITATION:

For conspicuous gallantry and intrepidity at the risk of his life above and beyond the call of duty while serving as a Squad Leader of Company E, Second Battalion, Seventh Marines, First Marine Division(Reinforced), in action against enemy aggressor forces in Korea on 4 November 1950. Assuming the point position in the attack against a strongly defended and well-entrenched numerically superior enemy force occupying a vital hill position which had been unsuccessfully assaulted on five separate occasions by units of the Marine Corps and other friendly forces, Corporal Phillips fearlessly led his men in a bayonet charge up the precipitous slope under a deadly hail of hostile mortar, small-arms and machine-gun fire. Quickly rallying his squad when it was pinned down by a heavy and accurate mortar barrage, he continued to lead his men through the bombarded area and, although only five members were left in the casualty ridden unit, gained the military crest of the hill where he was immediately subjected to an enemy counterattack. Although greatly outnumbered by an estimated enemy squad, Corporal Phillips boldly engaged the hostile force with hand grenades and rifle fire and, exhorting his gallant group of Marines to follow him, stormed forward to completely overwhelm the enemy. With only three men now left in his squad, he proceeded to spearhead an assault on the last remaining strong point which was defended by four of the enemy on a rocky and almost inaccessible portion of the hill position. Using one hand to climb up the extremely hazardous precipice, he hurled grenades with the other and, with two remaining comrades, succeeded in annihilating the pocket of resistance and in consolidating the position. Immediately subjected to a sharp counterattack by an estimated enemy squad, he skillfully directed the fire of his men and employed his own weapon with deadly effectiveness to repulse the numerically superior hostile force. By his valiant leadership, indomitable fighting spirit and resolute determination in the face of heavy odds, Corporal Phillips served to inspire all who observed him and was directly responsible for the destruction of the enemy stronghold. His great personal valor reflects the highest credit upon himself and enhances and sustains the finest traditions of the United States Naval Service. 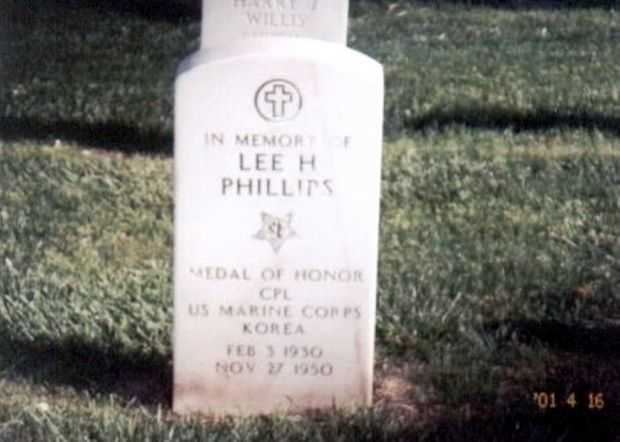